Choose the appropriate model year for the Kia Optima (K5) you are trying to find the oil type & capacity for from the list below. You can find 34 different trims for the Kia Optima (K5) and their corresponding recommended oil type.

The years available stretch from 2003 through to 2023 and to view the oil type and capacity you just click to expand.

Originally the Kia Optima was launched in the year 2000 as a rebadged Hyundai Sonata with only minor interior/exterior differences.

It went by several different names globally at different times such as the Lotze, the K5 and the Magentis.

First examples of the Optima were limited in choice of engine, you could choose a 2.4, a 2.5 or a 2.7 liter gasoline unit under the hood mated to a manual or automatic transmission.

It scored terribly in crash safety tests with only 1 out of 5 stars achieved, though as this was one of the cheapest new cars on the market at the time buyers had to weigh up the risks.

Second-generation (2005-2010) models of the car were lightyears ahead of the first with the safety rating now coming in at 3 out of 5 stars and styling to help it keep up with rivals.

New engine choices were vast and included turbo-diesel options for the first time with modern fuel-efficiency technologies fitted as standard.

When the third-generation Optima hit showrooms car buyers found a stylish model that now pushed the safety rating to an impressive 5 out of 5 stars.

Kia and Hyundai had transformed from low-end automobile manufacturers to affordable top-end ones and were now stealing massive sales from competitors.

Another two generations of the car have been released since the third and both continued the trend of improving styling, comfort and technology - keeping the 50 out of 5 stars safety rating. 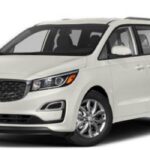