Choose the appropriate model year for the Nissan Altima you are trying to find the oil type & capacity for from the list below. 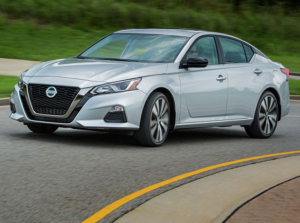 You can find 33 different trims for the Nissan Altima and their corresponding recommended oil type.

The years available stretch from 2002 through to 2023 and to view the oil type and capacity you just click to expand.

To take over from the popular Bluebird model that first hit the roads in 1957 the Nissan Altima was introduced in 1992.

In comparison to the aging Bluebird line, this model was much more modern with an aerodynamic design and an affordable luxury interior.

It has historically slotted in underneath the Maxima model and above the Sentra as a mid-range car for the masses.

Original models in the 1990s were limited to just one engine (a 2.4 liter gasoline unit) mated to a 4 speed automatic or 5-speed manual transmission.

The second generation Altima's carried on this tradition with the same engine and transmission options though the quality of the car was said to have dropped according to motoring publications.

Lessons were learnt though and the third generation that hit showrooms in 2002 improved on the car massively including a new range of engines and better transmissions.

Underneath this newer model was a platform shared with many of Nissan's other flagship models including the Murano.

Over the years since the tradition for more range and improvements has continued until the most recent rendition of the Altima that was released in 2018.

The sixth generation of the car has a choice of 2 economical engines and just one CVT to transfer the power from the engine to the axles.