Choose the appropriate model year for the Toyota Aygo you are trying to find the oil type & capacity for from the list below. 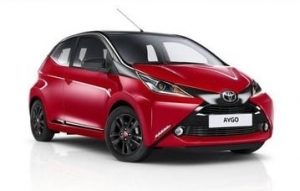 You can find 9 different trims for the Toyota Aygo and their corresponding recommended oil type.

The years available stretch from 2005 through to 2023 and to view the oil type and capacity you just click to expand.

The Aygo is Toyota’s city car that derives its name from the simple phrase “i-go” which according to Toyota is meant to show the freedom and mobility that comes with owning one of these compact hatchback cars. The Aygo is a small but capable hatch, developed in conjunction with Citroen and Peugeot and sold in the European market along alternatively badged Citroen C1 models, and Peugeot 107/108 cars.

The Toyota Aygo was first launched in 2005, and it enjoyed a 17-year production run, finishing in its second generation at the end of the 2022 model year. While it has been discontinued and replaced with the larger Toyota Aygo X, it went on longer than either of its Peugeot cousins, the last of which (108) only lasted from 2014 to 2021.

The Aygo had a quite distinct exterior design, compact but angular and contemporary. It received its first facelift in 2010, in which it received a new design for its rear lights. A second facelift came in 2012, updating the bumper design, and adding daytime running lights. All first-generation models enjoyed a superlative reputation for mechanical reliability and low breakdown rates.

The second generation brought big changes to the rear of the vehicle, especially in the light layout and design. It came in six different trim levels, offering part leather seats, machined alloys, keyless entry and start, a 7-inch infotainment system, and a rear-view reversing camera. The car was once again refreshed in a 2018 facelift, giving it a new front bumper, headlights, and a new version of the above-mentioned 1.0L engine.