Choose the appropriate model year for the Toyota Land Cruiser you are trying to find the oil type & capacity for from the list below. 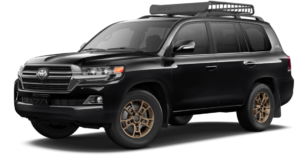 You can find 66 different trims for the Toyota Land Cruiser and their corresponding recommended oil type.

Earning its place as Toyota's longest-running line of cars is the Land Cruiser, a range of off-road vehicles starting in 1951.

A captured American Jeep during the second world war got the attention of the Japanese government who set out to build a clone for themselves after being impressed with its performance on the battlefield.

The Japanese military tasked Toyota to build the car after the company had many years of expertise in automobile manufacturing using lean methods.

In 1954 due to trademark violations the Toyota company stopped calling it the "Jeep" and assigned the name Land Cruiser which is still in use today.

Early models were extremely basic like the original Jeep that was captured yet this worked great for military applications that were hard on the vehicle and required simple repairs in the field.

Orders were made in bulk by organizations and militaries at first but as the design of the off-road vehicle was refined in the mid-1950s the car went more mainstream.

In the 1960's the sales started hitting 10,000 a year with models being exported all over the world and loved by emergency services such as mountain rescue teams.

Moving into the 1970' sales were still climbing with the Land Cruiser seeing 100,000+ sales a year and more and more features were becoming standard and a diesel engine became available for the first time.

Modern versions of the car see a much lower rate of sales as the heavy off-road trucks are becoming more niche as customers switch to lighter crossover SUVs such as the Mazda CX-7.