Choose the appropriate model year for the Toyota Avalon you are trying to find the oil type & capacity for from the list below. 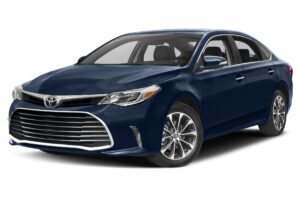 You can find 29 different trims for the Toyota Avalon and their corresponding recommended oil type.

Beginning life back in 1994 the Toyota Avalon is the Japanese automobile's flagship full-size car in the American, Canadian and Chinese regions.

It was intended as a replacement for the Cressida model that had served the company for 16 years but due to changing tastes needed retiring.

The Cressida was a rear-wheel-drive car and to cut back on weight to help with fuel efficiency Toyota knew they needed to focus their attention on a front-wheel-drive model.

Originally the car was built on its own platform but to help the company focus its resources on fewer projects the second generation began the trend of sharing its base with the similar Camry model.

This continued on and is still the case in the latest fifth-generation version and now it shares its platform with many other vehicles including the RAV4.

As this is regularly used as a family car safety was always an important factor in the development of the car, the Avalon has continued to achieve almost near-perfect safety scores across the disciplines over the years.

Modern versions of the car come with a variety of engine choices, including a smaller turbocharged unit to help it sell in China where they base import taxes on engine displacement.